A Story in Progress: A Stranger in Endurance, Part One 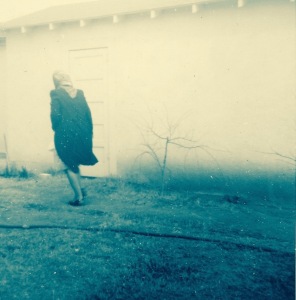 No one knew where she came from or just exactly when she arrived. Hell, no one even knew who she was. Of course it wasn’t long before people started speculating and once the speculating started, so did the talking–one thing you could count on from the folks of Endurance was talking, and a lot of it. The men did most of their talking at the Sinclair gas station over a game of dominos, while the women of Endurance conversed as they waited on their orders from the butcher at Crandall’s Market or when they were sitting in someone’s living room, sipping iced tea, and working on another quilt to be auctioned off for the benefit of The Red Cross and the war effort. And of course, everyone–men and women alike–talked on the church steps before and after Sunday services, although the after talk was somewhat subdued, thanks to the formidable presence of Brother Cletus Powell, the minister of The First Baptist Church of Endurance. Brother Cletus didn’t tolerate a lot of things and gossip was at the top of the list, right under drinking and dancing. And, of course, that’s exactly what all this talk was–gossip.

I like to think that I was the first one in Endurance to lay eyes on her but as time passed others made that claim. Old Mrs. Crandall says the woman came into the market her first day in town, purchased a can of Maxwell House coffee and a jar of grape jam, and left without ever saying a word or looking Mrs. Crandall in the one good eye the old busybody had–all highly suspicious in Mrs. Crandall’s opinion. John Tubbs at the Sinclair insists the mystery woman appeared at the door of the gas station out of nowhere, bought a Coca Cola out of his machine, put down five pennies on his counter and asked for a Milky Way. He says that when he turned back around after putting the pennies in his cash register, she was gone as quickly and silently as she had appeared. John was pretty sure all this happened before the woman ever entered Crandall’s market, an assertion which caused no small amount of ill will between him and Old Mrs. Crandall.

The best story concerning a first sighting came from Nettie Ledbetter, who lived across the street and two houses over from where the stranger took up residence. Nettie claims that she heard a noise one night and looked out her living room window just in time to see a shiny black Packard pull away from the house, leaving this woman and two suitcases in its wake. Nettie swears that as the car disappeared around the corner, this woman dropped to her knees right there in the middle of the street and cried like she’d lost her very last friend. All it all, it was pretty good narrative and might have been accepted as truth if anyone else had told it. But everyone in Endurance knew that Nettie Ledbetter saw all sorts of things that weren’t necessarily there if the whiskey she got from her bootlegger that week was a little too green.

My story wasn’t rich with details like the tales told by John Tubbs or Mrs. Crandall, and it certainly wasn’t as dramatic as Nettie’s, but it had one thing going for that the others didn’t; I knew it to be true. And my true story of seeing the woman occurred the Monday before Thanksgiving, 1943, as I was on my way to school. As was my habit, mostly because usually I was running late, I avoided the streets and instead made my way crossing through the backyards of our neighbors. It was cold and windy that morning and even though I was once again late for school, I just had to stop and look in Bob Frazier’s back shed. Bob’s bird dog Sadie had given birth to a litter of five pups over the weekend and the shed was serving as the nursery. I’d been there to help Bob and Sadie through the process and I felt it was my duty as an attending physician of sorts to check in on my patients. Once I was satisfied that Sadie and the pups were doing fine, I exited the shed and that’s when I saw her. She was making her way around the Broome place, which had been vacant for going on eight months now. She wasn’t big as a minute, and as she rounded the corner into the backyard, the force of the wind almost knocked her over. She quickly turned away from the wind and that’s when she saw me. We stood there for several seconds taking stock of each other before she turned around and headed for the back door. Before she went inside, she stopped and looked back at me again. And as farfetched as it sounds, I’ve always thought that this was the moment she made the decision to trust me.

Follow Extra Dry with a Twist on WordPress.com
Join 258 other subscribers